What if Auburn Brought Back Orange Facemasks?

In the early 1980’s, with Pat Dye at the helm, the Auburn Tigers football team, along with Bo Jackson, wore orange facemasks on their helmets. I don’t know for sure, because it was around the birth of ‘Blogle, but I believe this only occurred for one year. I want to say 1983. Don’t believe me? Look at Bo below. 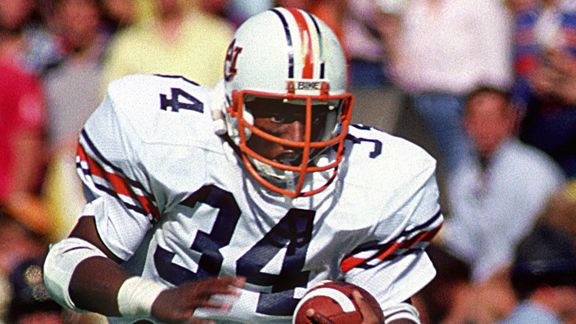 So since we’ve got a little time until next football season, I feel like riling up the old fogies who think that everything they remember from the last 15 years is how Auburn has always done it. I don’t absolutely love the look of an orange facemask on Auburn’s current helmet, but I don’t hate it. And if it’s good enough for Bo, then it’s good enough for me, and you, and you, and yes you sir over there screaming about Auburn’s “traditional” look.

Charles Sollars has kind of become my go-to when it comes to mockups of totally hypothetical Auburn uniforms. He gave us some very eccentric uniform concepts and some very eccentric helmet concepts over the last year, and they went over splendidly/terribly, depending on which side of the uniform tweak fence you’re on (I’m sitting on top of it, by the way).

This time I asked him to give us a look at what orange facemasks on a current helmet would look like. Auburn doesn’t wear BIKE helmets anymore, and the facemask styles have changed a ton in the last 20 years, so we needed an updated look. Here’s what he came up with: What do you think? Not too bad if you ask me. I don’t know if bright orange would get distracting to the guys wearing the helmets, but I don’t hate this at all.

Just for fun, Charles sent over a few other ideas with a few different colors. First, he went with grey, which Auburn wore way back in the day, and with the lone throwback uniform that I remember. I like it. We could actually go to this full time and I wouldn’t mind. Next he went with white, which sort of reminds me of this. Last, he sent another orange one over, with an alternate, orange-heavy AU logo. Meh… Switching to an orange facemask for one game would be a very subtle change. In fact, I bet most of you didn’t even realize what color Auburn’s current facemasks are — navy blue — until this post. I wouldn’t mind an orange version at all as a slight throwback to the days of Pat and Bo. Again, this is just for fun. It’s February. Have a little fun.