Tuberville Era Over (at Auburn) 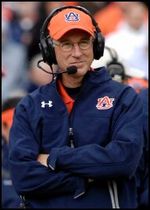 Official Statement From Tuberville: “The last 10 years have been a great time in my life, both professionally and personally. It’s been a great place to coach and live, and weve had a lot of success along the way. I’m going to remain in Auburn and help the Auburn family however I can. I’m very appreciative of the coaches, players, staff and Auburn fans over the last decade.”

From Jay Jacobs: “Tommy and I have had the opportunity to discuss the direction of the program. Through those discussions, Tommy felt it would be in his and the programs best interest to step aside as Auburns head football coach. We appreciate everything Tommy has done for this program, this university and the Auburn community over the last 10 years. He has established a strong foundation to build upon and we thank him for the standard he set. We wish Tommy and his family, wife Suzanne, and sons Tucker and Troy nothing but the best.”

Tuberville’s buyout of $6 million will also be paid in full. If this is honestly, truthfully, 100% how it happened then I am fine with it. This doesn’t have the normal ring of “asked to resign to save face” like Fulmer was. It looks like Tommy just didn’t have the energy and thought it was time to let someone else move in and give it a try. I am now looking for jobs where I can leave and still get $6 million. Let me know if you have any in mind.

So that’s over. Now who’s the next coach going to be?

**Update** Fox 6 News of Birmingham reports that the decision had been made by lunch time, and the afternoon meeting was just to hash out the details of the buyout. Tuberville was reported as telling Jay Jacobs that he had lost energy and wanted to spend more time with his family.

**Update** The OA News is reporting that Tuberville is resigning. More details are trickling in. Either way, I still believe that it all came down to firing assistants, which Tuberville did not want to do. He was probably told, “some of them go, or you go.”

Al.com is reporting that Tuberville is out as the Head Football Coach at Auburn. There are no details other than that. My speculation is that he wouldn’t budge on firing some assistants, which everyone agrees needed to happen. However, in the history of Auburn athletics and my life, I have never said anyone associated with Auburn should be fired (well maybe besides Tom Slater), but Jay Jacobs has got to go.

Jacobs has allowed this media circus (more to come on that later), and while panicking from one good year by Alabama, he has fired one of the most successful coaches in the history of Auburn football.

Hey head coaching candidates, 7-3 against your rival is unacceptable. Do NOT come here whatever you do.