It needed to be said. Jeff Holland’s dominance needs to be talked about more. In fact, Jeff Holland’s season of dominance is better than any season Carl Lawson ever had. To make this claim, it is necessary to back up with facts. I’ll start with the numbers.

What you can’t see in Jeff Holland’s is that he takes a bow afterward and it’s pretty AWESOME. Advantage Holland.

SACK RANKING:
in 2016, Lawson ranked 4th in the SEC in sacks. So far in 2017, Holland ranks 1st in the SEC. While there is still time that Holland drops below 4th, should Holland’s production remain the same, this won’t happen. Advantage Holland. 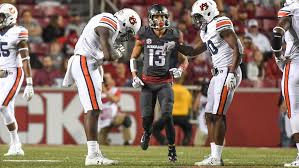 Holland takes this competition 3-0. If you disagree with this @ me on twitter (@AuburnEinstein) or in the comments.