Seriously, What is that?
3. They’ve won 11 of 17 of the last meetings
4. November 5th, 1922 through November 18th, 1932 are the most days between Auburn victories in the series.
5. Matt Stafford never lost to Auburn
6. They are obsessed their dog tried to bite an Auburn player. It’s not funny, get over it. 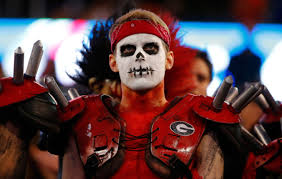 18. What’s up with that lip, tho?
19. They insist on UGA instead of UG. It’s worse than Ohio State emphasizing THE Ohio State.
20. My Grandfather played under Bobby Dodd at Georgia Tech, so it’s a generational hate.
21. I liked Terrell Davis for a short period in the 90’s until I remembered he played for Georgia.
22. More fan pictures: 23. Champ Bailey was an overrated NFL corner
24. HERSCHEL WALKER IS NOT BETTER THAN BO JACKSON
25. In 2005, Auburn beat Georgia 31-30 and I didn’t get to watch it.
26. What the heck is a Hobnail boot? Why do they celebrate this call to violence?
27. AARON MURRAY WAS DOWN!

28.  They share the same logo as the Green Bay Packers. I don’t care who was first, it’s dumb.
29. Auburn should have won last year.
30. They made too big of a deal about their first ever blackout game against Auburn.

Still, through all the hate, this has been an amazing 120 game series that has had many great memories on both sides. None greater than this one though…