Renovations and upgrades to Jordan-Hare’s South endzone, specifically the locker room and a new area or recruits, have been a topic for the last few months.

In an email from AD Jay Jacobs today, season ticket holders were given some detailed info along a few renderings to let them know of the plans. Most of us will never see these changes, but they are definitely nice and needed. The biggest difference will be the new press/operations box in the Southwest corner. Can’t wait to hear the beat’s thoughts on that.

Because I want all of us to feel included, here is the email (with renderings) from Jay. It’s lengthy.

As the buses roll to a stop at the corner of Samford and Donahue, players preparing for battle at Jordan-Hare Stadium quickly learn what makes Auburn special.

The doors swing open, and freshmen get their first real glimpse of the Auburn Family.

As the band blares the stirring notes of the fight song and fans of all ages cheer and whip their shakers, wide-eyed freshmen step off the bus and into one of the greatest traditions in college football. Tiger Walk.

These young men soon understand how much it means to generations of Auburn men and women, their children and their grandchildren. Walking to the stadium, they see it on their faces.

Their emotions rise as the crowd swells near Heisman Drive, where the noise gets louder and the electricity is palpable. Players who were only moments earlier quietly thinking about the game on the bus are full of energy as they reach Tiger Walk Plaza and the iron gates of the stadium.

They step over bricks laid by men and women who gave their best to this place they love, and they walk into a locker room where trophies won by legends like Sullivan, Beasley and Jackson are on display.

They hear the roar of the crowd as the band takes the field, firing up the faithful who support them year after year, in good times and tough times. They do not get to see the greatest tradition in college football, when the eagle takes flight and circles over perfectly manicured Pat Dye Field, but they hear the crowd thunder as the eagle lands at midfield.

While our players who sacrifice to wear those navy jerseys may not get to enjoy all the traditions we do as spectators, they draw energy from the electricity of 87,451 members of their new family.

They see, hear and feel what Auburn is all about. Passion. Tradition. Family.

This portrait of the Auburn Family and celebration of the Auburn way is exactly what we want our prospects and their families to see. It was at the core of the vision behind plans now taking shape to transform both the recruiting and student-athlete experience at Jordan-Hare Stadium.

We all know recruiting is the lifeblood of any football program. You may not be aware of just how important our gameday experience is to recruiting for all of our sports, as well as Auburn’s top academic colleges and schools that depend on college decisions that may not be celebrated on ESPN but are just as important to the institution and its mission.

Hundreds of recruits and their families attend our home football games. For them, an autumn Saturday in Auburn is like being a VIP at the ultimate family reunion.

That is why we are investing in major improvements to the locker room and recruiting space at Jordan-Hare Stadium. Thanks to the support of the Auburn Board of Trustees, work will soon begin on the first phase of our plan to continue enhancing the experience for players, recruits and fans at Jordan-Hare.

After an extensive planning process, we determined the critical needs were to improve the locker room for our current players and greatly expand and enhance the recruiting space for football and our Olympic sports.

I am pleased to share with you some renderings so you can appreciate the “wow” factor this project will create. 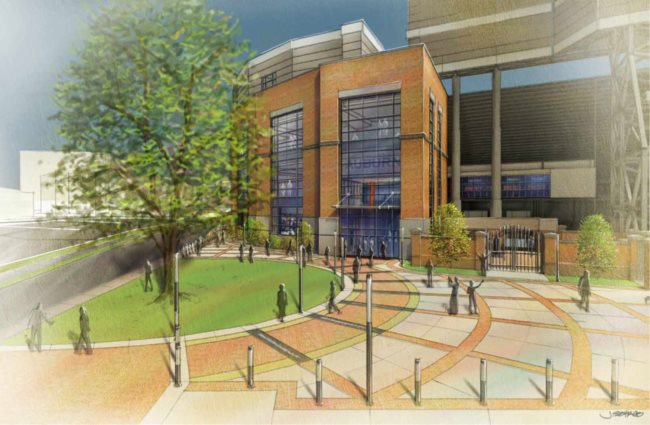 A new building featuring expanded recruiting space and club amenities for fans will blend in with the southwest corner of Jordan-Hare Stadium. 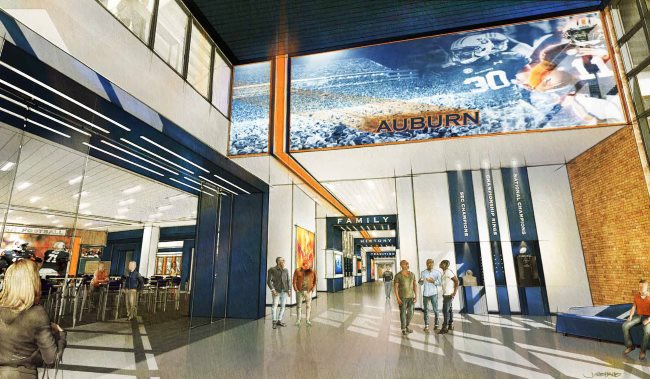 The new facility will give recruits a glimpse into the rich heritage and history of Auburn football, including SEC and national championships won by the Tigers. 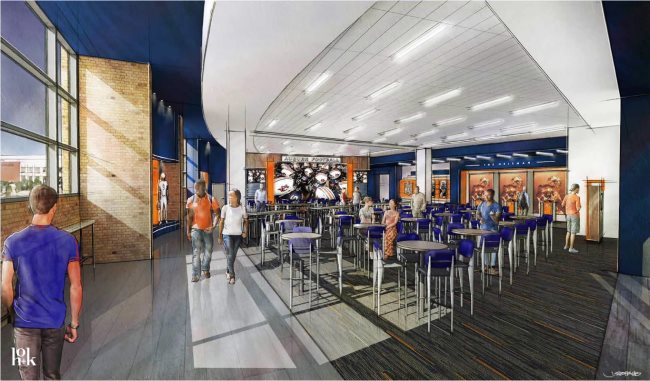 The expansive recruiting areas in the new facility will create an impressive, inviting and open space. It will inspire prospects and their families with the story of Auburn’s history and traditions. 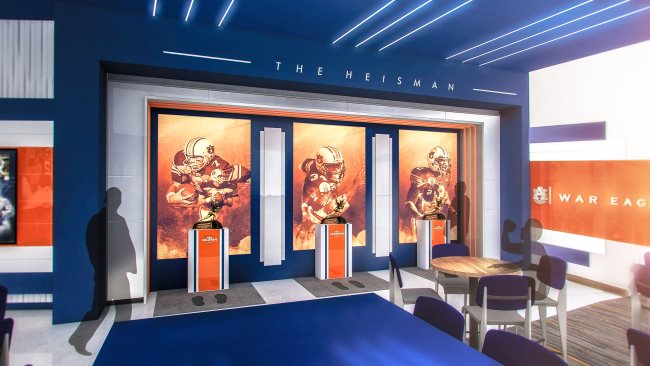 Auburn’s three Heisman Trophy winners will be prominently displayed in the new facility, designed to tell the Auburn story. 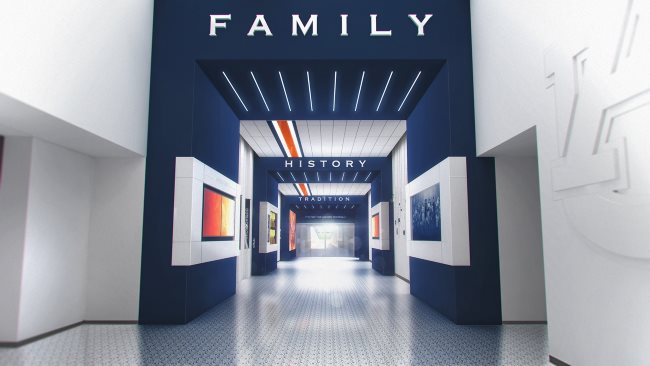 Auburn’s new facility will be the gold standard of college athletics recruiting, telling the Auburn story of family, history and tradition. 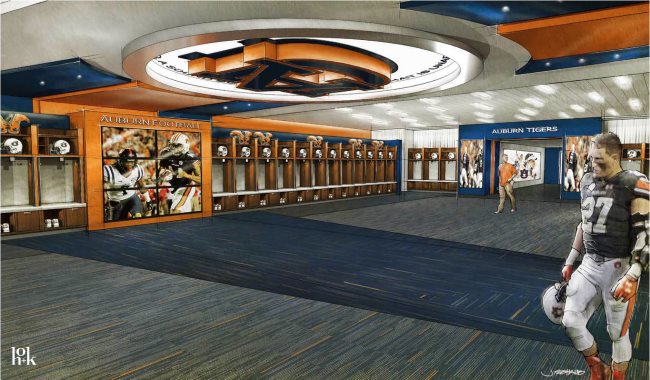 The locker room at Jordan-Hare Stadium will be renovated and expanded, creating a more open feel to emphasize unity while telling the story of Auburn’s rich football heritage. 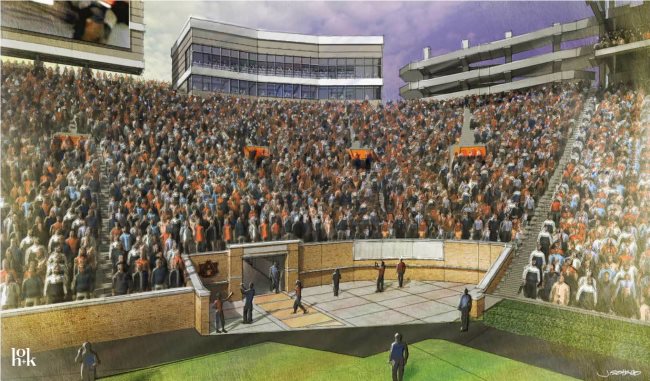 The top floors of the new facility in the southwest corner of Jordan-Hare Stadium will house a press box and football operations. 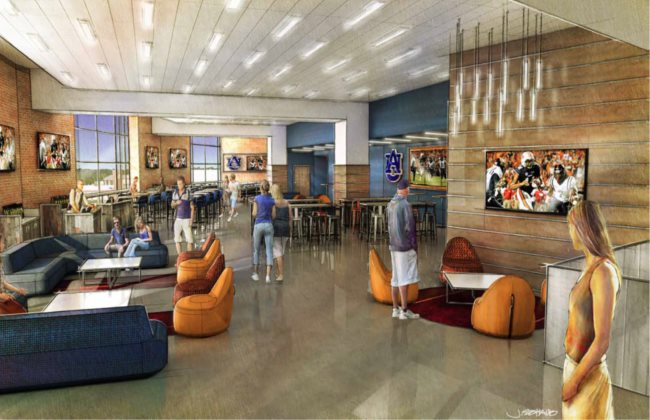 Creating new club space and fan amenities was a priority for the new project. Fans who join the club will be able to enjoy televised games, food and beverage service and a great view of Tiger Walk.

Auburn has a great story to tell. That was the starting point for the concept.

As you can see from the images, the expansive recruiting areas in the new building planned for the southwest corner of the end zone create an impressive, inviting and open space. It will inspire prospects with the story of Auburn’s history, tradition, passion and vision.

Recruits and their families will step into the recruiting area and see compelling displays of our Heisman Trophy winners and other greats, including Outland Trophy and Thorpe Award winners.

They will get a glimpse of Tiger Walk. They will see displays of championship rings and the crystal ball, and they will think about what it must feel like to come to Auburn with the hope of leaving with diplomas in their hands and rings of their own on their fingers.

Our football recruiting area will be significantly larger, and the Olympic sport recruiting space will nearly double in size. The facility will be the new gold standard in college athletics recruiting. We expect excellence out of our athletic programs, so we must model excellence.

With the continued support of loyal donors, who have already given 30 percent of the cost of this phase of the project, excellence is what we will achieve.

The new building will seamlessly blend with the stadium and provide a terrific view of Tiger Walk. It will also include two floors of club space for about 800 fans who choose to be a part of it. The club amenities will give fans a place for community, where they can congregate before, during and after games. Club members can enjoy the day’s televised games, good food and something cold to drink, and even take in Tiger Walk with a great view.

Enhancing the gameday experience has been one of our key strategic goals for a number of years. Judging by the fact Auburn’s gameday experience was voted #1 in the SEC for the 2nd straight year, those efforts have paid off. But we must continue to press ahead and look for more opportunities to enhance the experience while preserving the traditions that make Saturday afternoons in Auburn so special. We simply cannot afford to be complacent, and under my watch, we will not be.

Scripture tells us your heart is where your treasure is. I have a heart for student-athletes first. Doing all we can to enhance the student-athlete experience has and will continue to be my priority for facilities projects and programs we invest in at Auburn Athletics.

With this project now under way, I can say with confidence Auburn’s best days are ahead of us. One of the joys of meeting recruits who become those wide-eyed freshmen on the bus at the first game is seeing how much they change in four or five years.

Watching them grow and mature into Auburn men and women, as their dreams of earning degrees and competing at the highest level come true, is the most satisfying work one could ever do. I am grateful every day for the chance to serve in this role with the chance to influence these young men and women who leave here equipped to succeed in their careers and enjoy healthy lives of significance.

As donors and season ticket holders, you make that possible. Thank you.

Hope to see you in Auburn. It has been an exciting spring on the Plains so far, and the best is yet to come. So come join us!

What do you think? Looks pretty good to me. Comment below.