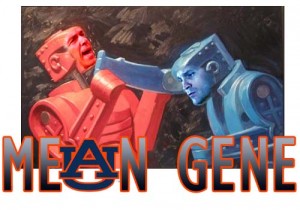 …if he can’t do it…well then that’s what we would expect, right?

That is my one and only web-based bash that you will read from the WarBlogler, I promise. Most people who talked to me on Saturday, after the news of Chizik’s hiring becoming official, probably thought that I was about to go out and buy me some houndstooth sneakers and some Bubba teeth, but the sting has waned. This is what we have, and we just have to deal with it. Besides, coaches, players, and even Kirk Herbstreit have nothing but good things to say about him. It’s just the fact that our AD thought this was the best choice. I think Chizik would even agree that he may not have been.

I want to make it perfectly clear to Coach Chizik, since I know he reads the Blogle daily, that I am not upset with him, I am 100% behind him as our coach. I will support him fully until he bolts for the Florida job when Urban Mayer leaves for Notre Dame in a few years. I swear that was my last bash.

But anyway, all this has been said countless times over every Auburn blog on the interweb, and I won’t hit it again. Everybody knows the records, the stats, and all that, but the point is that Gene Chizik is our new Head Football Coach. He is the man in charge of taking on Saban, and he doesn’t look like he’s scared of that task one bit. My man crush has moved on to you Coach Chizik. Do me proud.

Also, thanks to JackTheRabbit, we have the closest shot of Gene known to man (taken at the airport upon his arrival). 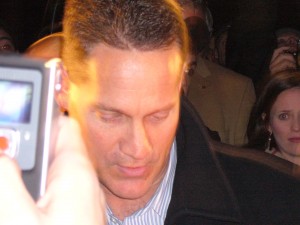