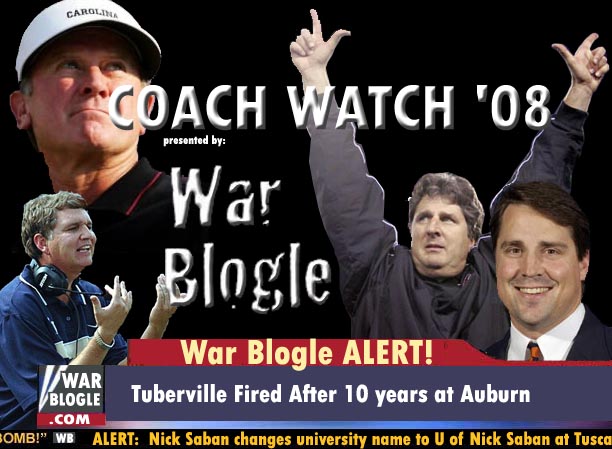 **Update on More Boring Interviews** – AL.com is reporting that Iowa State has confirmed that Gene Chizik has been interviewed and is a “serious candidate” at Auburn. Let’s look at every coach that left us for a “better job”. That makes sense.

**Update to the Boring Coach Update** – And as is the norm, we have another story refuting the Holtz announcement.

**Boring Coach Update** – This isn’t Muschamp related, but while we’re at it, here’s a report saying that Skip Holtz will be named the coach by this afternoon. Somehow I feel like the tv stations/newspapers with all of these reports have a steady supply of darts and pictures of coaches.

**Update** – Muschamp “officially” says no according to AL.com.

As the Blogle reported yesterday (before any of the other media outlets regionally or nationally), a Fox affiliate out of Mobile reported that Will Muschamp was close to signing with Auburn and his hiring would be announced today. But of course, the story changes again. Dan Patrick, who broke the story of Tuberville’s resigning/firing hours before any other outlet, reported that Muschamp was in fact talking with Auburn, but the only hangup was that he wanted to report directly to Jay Gogue, and not Jay Jacobs. This somewhat gave some merit to the Mobile station’s story until Tony Barnhardt said this:

I just got off the phone with Will Muschamp, the defensive coordinator and head coach in waiting at Texas. He emphatically shot down television reports in Mobile that he would be the named the next coach at Auburn today.

“I have not talked to Auburn about this job and I have no interest in the job,” said Muschamp. “I really don’t know what else to say. I’m going to stay at Texas until they fire me.”

My sources tell me that some Board of Trustee members did pick up the phone and call Muschamp to find out if he was interested. But those sources also tell me that when Muschamp was at Auburn as DC, he and athletics director Jay Jacobs did not part on the best of terms.

Dan Patrick is not backing down, though. He says that Will Muschamp can say all he want that he hasn’t talked to Auburn, but he has. If that’s true, then Muschamp looks like he’s learned from one of his former bosses.

What does this all mean? You got me,  but I believe Barnhardt and Patrick. It’s hard to believe Muschamp would be coming back after his coach-in-waiting deal with Texas, but it was hard to believe Satan was leaving the Dolphins after repeatedly saying that he wasn’t. Plus, Muschamp has to say he hasn’t talked to Auburn in case nothing get’s worked out because he doesn’t want Texas to think he’s looking for other gigs. But if he has talked to Auburn and takes the Auburn job, the bridge to Texas has already been burned and it doesn’t matter anyway.

In other boring coach news, Jay Jacobs is supposedly talking with Jim Grobe of Wake Forest and Gene Chizik of Iowa State today. I don’t know about you, but if I was a recruit and was looking for some exciting football, these are the first two men I think about.