It Wasn’t that Bad

I was going to leave it alone this week, I really was, and then I made the mistake of turning on Finebaum for two minutes today. Supposedly Alabama beat Auburn the last six years because Auburn fumbled three times Saturday.  I will say it like I always say it, until you can beat Auburn, or Mississippi State, or Lousiana-Monroe, or any other team that Auburn has beaten since the last time you have, keep your mouth shut, Bammers. 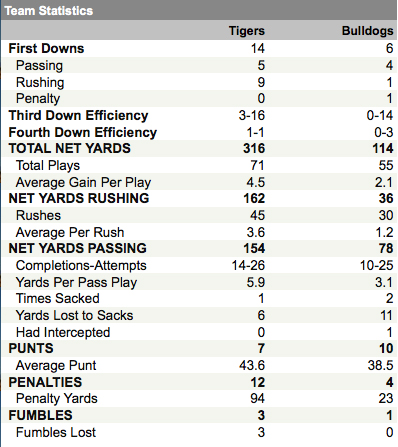 Some of these numbers are actually somewhat respectable. They aren’t good by any means. They won’t win tons of games every year, but it does prove that our offense isn’t “horrible”, “still looking for a quarterback”, or any other things that Alabama fans sitting at home during the normal workday said on the FineBama Network. I’m not going to say for one second that it was good or acceptable. I’m just saying if we don’t fumble three times, if we don’t have drive killing penalties (which all of a sudden swole up during a game in a made for tv environment), if we line up behind center for one play inside the 5-yard line, then we’re talking about another decent performance and a good showing in the road/SEC-opener. Fumbles and penalties can go away in one week, they aren’t the kind of stats that warrant the labeling of a ‘horrible offense’.

The only problem I have as far as things that should be figured out during the game and shouldn’t happen often is the spread offense inside the 5. I’m not saying Chris Todd sucks and Kodi should be playing. So far Chris has looked better at passing and running the offense. I’m just saying to put Kodi in there and let him run it in like we’ve seen him do many times. Anyway, that’s just my opinion, but I’m not going to yell ‘Fire Tony Franklin’ or ‘Chris Todd sucks’ just because we didn’t get many points because of fumbles and penalties.

One last thing,  what gripes me the most is that almost every person who called in said they didn’t watch the game, so how would they know what the offense looked like or if it really did ‘suck’? Did the man on the picture box just flash a score on the screen and the last 10 years of Bama Suckdom went away? Go shave mama’s back.