I figured I’d take a little break from football since we don’t have a game this week and look into to the Auburn basketball team: my second favorite Auburn sport, the only Auburn team I yell at in anger. Ok, so we have all these players coming back, everybody in fact, from a team that was decent last year. We beat Alabama twice, and were 40 seconds away from winning the West, but somehow lost it in the end to Ole Miss.

So like I said, we have all these people coming back and should be so great, then what happens? Our two leading scorers decide to act stupid and/or take a medical redshirt. Lebo refuses to release the reason for Josh Dollard’s medical redshirt, so it must be something embarrassing. Maybe something that starts with an S, ends in a D, and has a T in the middle? I don’t know, I’m just speculating. 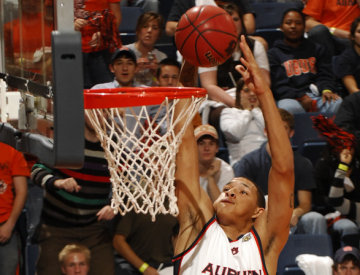 No really I’m just kidding. I hope he gets better, and actually it’s kinda good, cause we’ll have him for two more years. But on the stupid front, we have Quan Prowell, who is two-for-two in starting the season on suspension. He is probably the closest thing Auburn has had to Chris Porter in 10 years and I guess he has to act like him off the court as well. Why can’t we catch a break? We look like we’re gonna do alright, and stupid messes it up again.

Also, to top it off, we are for some reason playing a ton of road games to start the season, besides the monumental battle with Kennessaw State. I kinda agree with this idea, but obviously it’s not working out very well for us. We lost to TULANE!…TULANE by 15!. What? I mean I know our two best players aren’t there, but seriously, what’s the deal? I mean I’m sure we’ll do alright in the SEC. Lebo looks like he’s starting to make up some ground on the rest of the teams, before he leaves for a basketball school the minute we win the West. But Tulane? What a great start to the season that was supposed to be the best in a while for Auburn.

Anyway, so at this point we are 1-1, and tonight we play our friends from down I-85, the hornets, Alabama State. Ok, we should win this one right? At first glance you would think so. But after doing a little research, I think our chances are very slim. They have a freaking Indian on their team. Not like Indian from India. I’m talking Indian like Native American. And not just the village idiot. We’re talking the Chief of the whole tribe. Check this out…and this is totally for real. Alabama State’s Chief

HAHA. WHAT? Seriously, that’s his real name. That’s awesome, I guess, if you don’t mind playing basketball with horses. How are we gonna run the floor next to a stallion? Great. Our dream season ruined by the people who really own this land we live on. I told you the Trail of Tears was a bad idea. Hopefully we can pull it out. Remember we have firearms.

So the Iron Bowl is in 8 days. I will be there, will you?