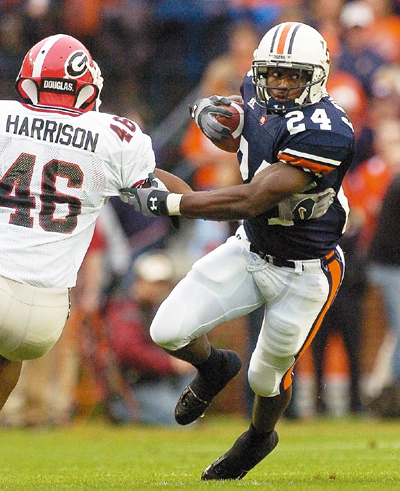 Yes, it was absolutely awesome to beat Florida, and yes, we should have beaten LSU, but these two games are what matters most. Most of us don’t live in Florida or Louisiana. We live right next door to someone who pulls for Georgia or Alabama. Right next door to a person that you would love if they pulled for Auburn, or if college football never existed, but since they pull for the Dawgs or the Tide (apparently red water is scary) we know for a fact that they are trading government secrets or know where Bin Laden is, and that we wouldn’t…well I’ll keep it clean, let’s just say we wouldn’t do something if they were burning alive and we had to go number 1 (got it?). They’ve probably never done anything wrong to us personally, but donning that “Got Twelve” t-shirt and mullet, or barking at me when I go take out the trash, makes me want slap their 2 year old baby. Anyway, my point is, we live with these idiots, and we don’t want to hear “woof, woof” or “ro’ tie! (yes tie)” all year so we better win these two games, and we should win these two games. But I’ll talk more about our toothless brethren across the state in the next two weeks. For now, it’s Georgia week.

So Georgia has this freshman, Knowshon Moreno, that is supposedly good, and this week there have been comments about him being very similar to Cadillac. Uh yeah, play more than one season, and we can say that. And also supposedly he is the 15th coming of Herschel Walker. How many freshman running backs has UGA declared Herschel Jr. only for the guy to end up sitting at the end of the bench by his junior year? Danny Ware, anyone? You would have thought this kid was turning water to wine the way they talked two or three years ago.

And who cares if he was limited by injuries? Cadillac broke his leg 15 times. William Wallace took an arrow to the chest and was having his spleen removed and burned right in front of him and he still mustered up the guts to yell “FREEEEDOM”. That gave me chill bumps just to type that. So shutup with the Cadillac and Herschel Jr. talk. He’s run for some yards, so what? Darren McFadden has run for thousands more, but didn’t do anything against us. We’ll see how fast little Knowshon runs when Josh Thompson flashes his tats at him.

And seriously…his name is Knowshon? Do you know him? Who? Shon. Do you Knowshon? I mean yes we’ve got our Sen’Derricks and our Eltorros, but Knowshon? Was his birth like, “here you go Ms. Moreno, it’s a baby boy, and look at those legs, he may be able to walk on water”. All of sudden a nurse walks in and says, “Some guy out here is asking for you, Ms. Moreno. He says his name is Shawn. Do you know Shawn?” Yeah, I’m pretty sure that’s how it went.

Anyway, I never like to act like Auburn is going to win anything or proclaim that we’ll win 52-0. I know how weird college football is, and I know that nothing matters in these two games. I know that we have an awesome record in Athens, and still have our 15 game winning streak in white uniforms, so we’ve got that working for us. Hopefully, the trends will continue, and the Georgia team that was manhandled by Tennessee, who was manhandled by pitiful Alabama, will show up and we’ll be the team that played against Florida, with a little more offense in the third quarter. If those teams show up, we should put ’em out early. War Eagle and post your thoughts!