Yes I know, it’s the gentlemanly thing to do, and I know you shouldn’t beat somebody’s brains out mercilessly because they could very well get revenge the next year, but is beating Vanderbilt by say 35 or 42 so bad? Why is that when we come out and shut the prognosticators up by putting Vandy out of the game very early, we end up letting them making it look halfway respectable? Yes, there is a difference in 35-7 and 42-7. Yes, there’s a difference in a shutout, and allowing seven points late in the 4th quarter with your second and third string defense in. Auburn lost much respect with the loss to Mississippi St. and today was a great opportunity to get some of it back. The AP voters and coaches who didn’t get a chance to watch the great production that is Lincoln Financial Sports, are going to look at the score of 35-7 and say eh, Auburn beat ’em pretty good, but it’s Vanderbilt. What would have they said to a 62-0 score? “Wow, Auburn looks like they turned their season around with that win at Florida last week. They’re offense must be clicking on all cylinders. They are definitely in my top 15!” But no, we get a 28-0 lead by halftime(actually two minutes before halftime) and run tailback right, tailback left, and an occasional five yard pass on 3rd and 13 just to make it look like we are trying to get a 1st down, when on the others plays it seriously does not. I mean before we even put our second string in there, it looks like the O-line that was blocking during the South Florida game. I don’t know enough about the plays and what everyone is doing on every single play, but it seriously does look like a completely different team when we get into “run the clock out, and get out of here with a win” mode. I completely agree with that plan when you’re handling a team, like Florida(man I love the the video of Wes Bryum doing the gator chomp), and just getting up a few touchdowns and running the clock out and keeping it simple and conservative, but this was Vanderbilt. Some people who actually have been allowed airtime on the Finebaum Radio Network(man I hate that show, but always listen to it) actually pickd Vanderbilt, and most other “experts” picked Auburn to squeak it out in the end. We had Vandy where they belong, looking like they deserve to bring up the rear in the SWAC. We finally opened up the playbook. I remember saying to my brother before one of the plays, “these look like pays from 2004”. And what do we do? We get them down 28-0 and just stop. We’re we scared they were just gonna turn it up and start throwing bombs and running all over us so just had to run the clock out as quickly as possible and get out of there and be like “Whew, they almost had us”? This was our problem in 2004, 2005 and now in 2007. PUT THE TEAM AWAY AND BURY THEM! SHOW THE VOTERS THAT DON’T WATCH OUR GAMES THAT WE HAVE THE POWER OF USC AND CAN PUT UP 50 IF WANT. We had the opportunity today and didn’t take it, and now it looks just like another ho-hum victory. Oh well, we won. What do you think? Seriously, I’d like some thoughts. 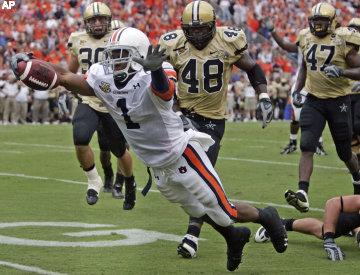 I don’t wanna only be negative because to me anybody connected to Auburn can do no wrong. I love seeing Brad Lester back. It looks like all of the tailbacks are stepping it up to keep a spot in the rotation. I still don’t know what to think about King Dunlap. He’s almost too big. We actually seemed to slow down a little when he came in the game. I don’t care if he has been practicing harder than ever, if the freshman are beating him out in the games, keep them him. But the more people you have at a position, the more they compete, and the harder they play. All in all it was a great day for Auburn. We just really need to focus on stopping Felix Jones and McFadden next week. I’d like to return the favor from last year.

Now lets go Gators. Oh and Bama is Back….back to beating barely mediocre teams by six and having to hold them to win on the last play of the game. Supposedly, Jesus didn’t come back as Saban.